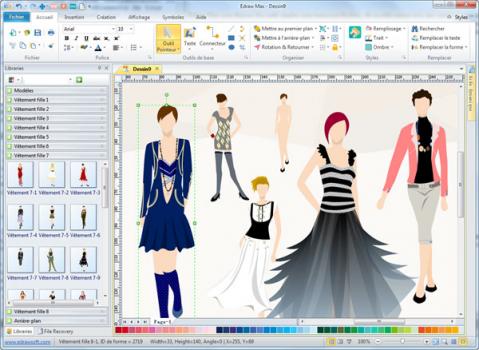 Computer-aided designers in the fashion industry use computer software to create sketches and other designs used to create clothes, accessories, shoes, intimate apparel, and more. Computer-aided design or “CAD” is fast becoming the future of sketching in the fashion industry. According to the Bureau of Labor Statistics, a growing number of fashion designers translate hand sketches to the computer, which allows designers to view designs of clothing on virtual models and in various colors and shapes. This saves time by requiring fewer adjustments of prototypes and samples later.

What do computer-aided designers do and where do they work?

Computer-aided designers use computer software to create sketches of designs. They use the software to create prototypes for clients, employers or for designs that will eventually become a part of their own private collections. Computer-aided designers work for retail companies, fashion designers, textile companies, apparel manufacturers, and design studios.

It is virtually impossible to obtain a position as a computer-aided designer without creativity and technical knowledge. According to the Bureau, while applicants must have advanced knowledge of CAD software other qualifications are just as important. Manual sketching ability is still essential as well as a sense of balance and proportion and an eye for color and detail.

Because CAD is becoming more popular in the fashion industry, aspiring designers with CAD experience will likely have more opportunities than designers without it. Employment of fashion designers overall is expect to average 1 percent for the 2008-2018 decade. According to the Bureau, the best job opportunities will be in design firms that design mass-market clothing sold in department stores and retail chain stores, such as apparel wholesale firms.