50 Top Fashion Designers: Where Did They Go to School? 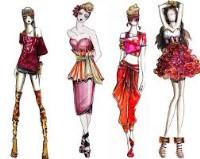 Just about every fashion designer on the planet can name a few people or programs that had a hand in helping shape them into the world famous designers they would ultimately become. Nuns taught Coco Chanel everything she knows, and Parsons The New School for Design has educated so many world-famous designers, you’ll lose count. Marc Jacobs, Donna Karan, and Tom Ford are just a few.

While a degree is not always the best or most practical route for some, you will notice that many of the famous designers on our list have a degree or multiple degrees. The industry as a whole follows suit. According to the Bureau of Labor Statistics, “most fashion designers have a bachelor’s degree in a related field, such as fashion design or fashion merchandising.” So while talent can certainly go a long way, in today’s competitive world of fashion, designers must have specific skills that can be quite difficult to acquire on one’s own.

Advanced knowledge of computer-aided design (CAD) technology, textiles and fabrics, design techniques, a thorough understanding of the production process, and much more are the tools most designers need to become successful in fashion. Continue reading to find out where 50 of the world’s top fashion designers mastered these skills and more.

2. Anna Sui
Anna Sui attended Parsons The New School for Design in New York where she earned a BFA in Fashion Design.

4. Badgley Mischka (Mark Badgley and James Mischka)
Both Mark Badgley and James Mischka attended Parsons The New School for Design where they earned BFA degrees in Fashion Design. Before Parsons, Badgley studied Art at the University of Oregon in Eugene. He moved on to the University of Southern California in Los Angeles, where he took business courses. Mischka was a Biomedical Engineering major at Rice University in Houston where he planned to study to design artificial limbs. He later switched to an Arts Management program.

5. Betsey Johnson
Betsey Johnson attended both the Pratt Institute in Brooklyn, New York and Syracuse University. She majored in Art.

6. Calvin Klein
Calvin Klein attended the Fashion Institute of Technology (FIT) in New York and the High School of Art and Design, also in New York.

7. Carolina Herrera
Carolina Herrera attended Vassar College in Poughkeepsie, New York where she studied Biochemistry and Biopsychology. She received an honorary Doctorate of Fine Arts from the Fashion Institute of Technology (FIT).

9. Christian Louboutin
Christian Louboutin worked at the celebrated Parisian cabaret Folies Bergère, where he had the opportunity to create shoes for the dancers. Later, he landed a job with Charles Jourdan where he learned about the inner workings of the shoe business.

11.  Coco Chanel
Coco Chanel learned the sewing trade from the nuns who ran Aubazine Abbey, the orphanage she grew up in, in Corrèze, France.

12. Cristobal Balenciaga
Cristobal Balenciaga had an interesting background in fashion. His mother was a seamstress. In addition to working with her, Balenciaga worked as an assistant to a tailor at age 12. In his teens, Balenciaga designed for Marchioness De Casa Torres (the noblewoman of his town), who would later send Balenciaga to Madrid, Spain for formal training.

15. Donna Karan
Donna Karan attended Parsons The New School for Design in New York where she earned a BFA in Fashion Design.

16. Emanuel Ungaro
Emanuel Ungaro learned tailoring by working with his father (a tailor) in France. At age 23, he moved to Paris and soon began working as an assistant to Cristobal Balenciaga. He worked with Balenciaga for six years.

18. Gianni Versace
Gianni Versace learned about the world of fashion design from his mother, a dressmaker. After graduating from high school, Versace began assisting his mother with designs in her boutique. Later, he moved to Milan, Italy where he worked for several Italian design studios including Genny, Complice, Mario Valentino, and Callaghan.

19. Giorgio Armani
Giorgio Armani attended the University of Piacenza, Italy, where he studied medicine for two years. He learned about fashion by working at La Rinascente, a famous Milan department store, followed by work as a designer for Nino Cerruti, and other companies as a freelance designer.

21. Isaac Mizrahi
Isaac Mizrahi attended Parsons The New School for Design in New York where he earned a BFA in Fashion Design.

24. Jimmy Choo
Jimmy Choo studied at the Cordwainers Technical College in Hackney, England where he graduated with honors in 1983. Choo also learned craftsmanship from his father—a shoe cobbler in Penang, Malaysia. By age 11, under his father’s direction, Choo had already made his first pair of shoes.

25. John Galliano
John Galliano attended Central Saint Martins – University of the Arts London where he received a BA in Fashion.

26. Karl Lagerfeld
Karl Lagerfeld attended the private art academy Lycee Montaigne in Paris as a teen, where he majored in drawing. Soon, he was hired by French designer Pierre Balmain as a junior assistant, working his way up to design assistant.

28. Marc Jacobs
Marc Jacobs attended Parsons The New School for Design in New York where he earned a BFA in Fashion Design.

29. Michael Kors
Michael Kors attended the Fashion Institute of Technology (FIT) in New York for two semesters. Later, he worked at Lothar’s—a French boutique, where he had the opportunity to design and merchandise his first fashion collection.

30. Miuccia Prada
Miuccia Prada received her fashion training within the family business. Her father is Mario Prada, who started the fashion line in 1913. However, Miuccia Prada attended the University of Milan, where she earned a PhD in Political Science. She also trained as a Mime for five years at Milan's Piccolo Teatro.

33. Ottavio Missoni
Ottavio was self-taught. He was the founder of Ottavio Missoni, he represented Italy as the hurdler in 1948 Olympics, and he was a former POW. After the war, Ottavio and his teammate Giorgio Oberweger launched a collection of activewear in Trieste, Italy creating tracksuits titled Venjulia suits. The rest is history.

34. Pierre Cardin
Pierre Cardin received hands-on training at several fashion houses. He worked for a tailor in Vichy, France early in his career and later moved to Paris where he found work at the Paquin fashion house and then the Schiaparelli fashion house.

37. Rene Lacoste
Instead of enrolling in a prestigious French engineering school, Rene Lacoste became a world champion tennis player (he won 10 major titles), and later a famous fashion designer. He was self-taught.

41. Thomas Burberry
Thomas Burberry completed his elementary education at Brockham Green Village School in Surrey, England. He worked as an apprentice at a local draper's shop before opening his own outfitting business in 1856 in Westminster Street, Basingstoke.

44. Tory Burch
Tory Burch attended the University of Pennsylvania in Philadelphia where she earned a degree in Art History.

45. Valentino Garavani
Valentino Garavani trained in Paris at the École des Beaux-Arts and the Chambre Syndicale de la Couture Parisienne. He worked as an apprentice for Jean Desses and Guy Laroche.

46. Vera Wang
Vera Wang attended The Chapin School in New York as a child and The School of American Ballet, also in New York, before enrolling at Sarah Lawrence College in Bronxville, New York. During her sophomore year, Wang briefly studied abroad at the Sorbonne in Paris, but returned to the United States to complete her degree in Art History at Sarah Lawrence.

48. Yohji Yamamoto
Yohji Yamamoto graduated from Keio University, Tokyo in 1966 and Bunka Fashion College, also in Tokyo, in 1969. In 2008, he received an Honorary Doctor from the University of the Arts London.

50. Zac Posen
Zac Posen attended Saint Ann’s School in Brooklyn, an independent school with a heavy focus on the arts. At age 16, Posen enrolled in a precollege program at Parsons the New School for Design where he studied patternmaking. Posen completed a two-year internship at the Metropolitan Museum of Art Costume Institute and an internship at the Nicole Miller fashion house. Later, Posen attended Central Saint Martins College of Art and Design at the University of the Arts London where he completed a degree program in Womenswear.